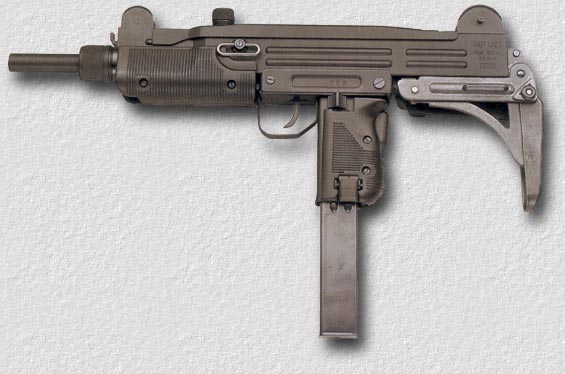 Used by dozens of countries for over five decades, the UZI submachine gun is one of the world's oldest and most famous firearms still in use today. This is especially unique since the basic design of the UZI remained unchanged over the years. Made famous by military and law enforcement agencies around the world, made infamous by Hollywood, the UZI is known to everyone.

The history of the Uzi started in 1951, when designer Uziel Gal submitted his design for testing by the Israeli Defense Force (IDF). Gal drew on his own battlefield experiences to ensure that the UZI could suit even the weariest of soldiers operating in the dark. With few parts, it was easy to strip and reassemble, and he housed the magazine in the pistol grip - an innovation that enabled soldiers to reload according to the simple 'fist finds fist' principle. The UZI was selected due to its lower manufacturing cost, ease of use and greater reliability in battle conditions found in the Middle East. Production of the UZI was started by Israel Military Industries (IMI); a name that has become synonymous with the UZI.

The UZI fires the 9mm Parabellum cartridge at a cyclic rate of 600 RPM. It fires from the open bolt position and employs a simple blow back mechanism. The gun makes extensive use of sheet metal stampings, making the construction simple, yet durable and extremely solid. An innovative part of the UZI design is its bolt, which wraps around the chamber end of the barrel. This overlap of 3 ¾” allows the weapon to have a relatively long 10.2” barrel while still maintaining a short overall length.

In the United States, the only transferable full auto UZI carbines manufactured by IMI are the ones that were imported and registered as NFA weapons prior to the Gun Control Act of 1968 (or during the amnesty period that was offered at that time.) There are few of them around and they command a premium price. In 1980, Action Arms started to import and distribute UZI's in the United States to both the law enforcement and civilian markets. The fully automatic UZI was offered to law enforcement in 9mm originally, but a 45.ACP version was added in 1985 along with a .22 LR conversion kit. For the civilian market, the semi automatic Model A was offered, followed later by the Model B which incorporated a few minor differences. With the scarcity of original UZI SMG’s, it became common in the 1980’s to convert Model A or B UZI’s into full auto SMG’s. There are many registered conversions available today, some being registered receivers, some being registered bolts, and a few being registered sears. It’s important to know what you’re buying when you look at a full auto UZI because it was a common practice to restamp the receiver markings to look like an original UZI SMG. The easiest way to tell for sure is to look at who’s listed as the manufacturer on the gun’s NFA registry form. If the manufacturer isn’t IMI, then it’s a conversion.

The semi automatic Model A and Model B sold in the United States fire from a closed bolt, as required by the BATF at the time to make it more difficult to convert to full automatic. The semi automatic guns also came with a 16.1" barrel to meet federal regulations. In 1987, Action Arms began shipping .45 ACP and .41 AE versions of the Model B, along with caliber conversion kits allowing conversions between the three calibers that the Model B then shipped in. Also in 1987, Action Arms began shipping a semi automatic version of the Mini UZI. Due to the smaller size of the gun, it came with a 19.75" barrel to meet the overall length requirement for a rifle. Due to the import ban on assault weapons, Action Arms was forced to discontinue importation of both the full sized carbine and the Mini carbine in 1989. That left Action Arms with only one UZI to sell - the UZI Pistol, which is a semi automatic version of the Micro UZI. Action Arms sold the UZI pistol until 1993, when federal laws prohibited their importation.

In the mid 80's, another competitor showed up on the UZI scene. Group Industries had originally made its reputation converting semi automatic UZI's to select fire weapons, but in 1985-86 they manufactured and registered their own UZI receivers. Unfortunately Group Industries struggled through financial and legal problems for a number of years until they were finally ordered to liquidate their assets under chapter 7 in early 1995. 3318 UZI receivers were sold at auction and purchased by Vector Arms. It took years of work to find or build the parts necessary to assemble the receivers but on May 25, 1999, the first Vector UZI was shipped. Another UZI clone that made its way into the United States in the 1990's is the Norinco UZI from China. One shipment of Norinco UZI's just made it into the US in the mid 1990's before they were banned.