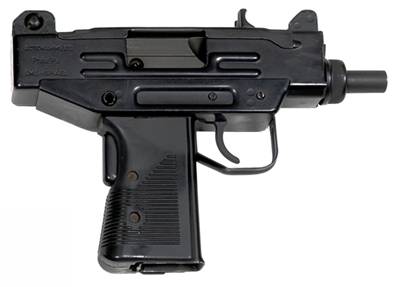 Again looking towards the American commercial market, IMI designed a scaled down version of the UZI and sold it without a stock as a pistol. Action Arms began selling it in 1984. The UZI Pistol fires from a closed bolt and used the same fire control assembly as the semi automatic UZI carbine, but is fitted into a slightly different shaped grip frame to fit the smaller sized receiver. Action Arms imported the UZI pistol into the United States in both 9mm and .45 ACP, along with caliber conversion kits between these two calibers and .41 AE. Action Arms discontinued importation of the .45 ACP version of the UZI pistol in 1989 but continued selling the 9mm version until 1993 when federal legislation put an end to it. When the trigger guard was changed to an angular style on the Micro UZI, the change was also brought to the UZI Pistol. While it provided little benefit to the semi automatic pistol, it reduced production costs by using the same grip frame on the two guns. Since all Micro UZI's imported into the United States were for law enforcement use only, some people converted UZI Pistols into Micro UZI's. Any transferable Micro UZI actually started life as an UZI Pistol.

In 1986, IMI introduced the Micro UZI - a full auto version of the UZI Pistol. Less than 10 inches long with the stock folded, the Micro UZI provided the ultimate in compact firepower. It was intended mainly for security roles, providing more potent fire power in a handgun frame weapon. Another role intended for the Micro UZI was as a Personal Defense Weapon (PDW) for airborne and armored crew personnel in the IDF. The Micro UZI is closed bolt operation and came standard with the new style sights and ported barrel that had been introduced with the Mini UZI. The wire frame folding stock was leather or rubber covered, making it somewhat more comfortable to fire.  In the early 1990's, the front of the Micro UZI trigger guard was changed from flat to angular to aid in control under fully automatic fire.

More recently, IMI produced a new version of the Micro UZI. Known as the Para Micro UZI or the UZI Pro, it was made especially to meet the operational needs of the Israeli Special Forces (SF) Counter Terror (CT) units.

Today, the Micro UZI is mainly being used by the rappelling and fast roping sections of the Israeli CT units. These elements need a compact gun to allow them ease of movement in tight spaces, yet a more powerful weapon then the average handgun. The new Para Micro UZI comes custom made to answer these demands, and is in active deployment in the Israeli CT units. 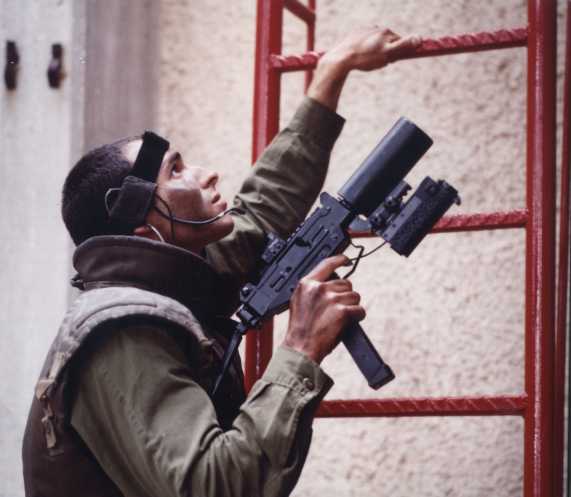 The Para Micro UZI features several new important improvements compare to the old version, reflecting the changes in modern firearms since the first Micro UZI was produced in 1984: